Are you ready for a breath of fresh air?

Get that and more from Subrau’s trim, new 2020 BRZ tS– a fresh homecoming sure to leave drivers breathless, if not gasping for air.  It is, after all, only offered with a six-speed manual gearbox. There is no automatic, making it one of the nine US-offered vehicles available only in standard.

Forget the standard coupe that captured your imagination with the 2018 edition, that was limited to only 500 units. Nobody knows number of 2020 BRZ ts units the Japanese automaker has slated for assembly. But we do know the latest model comes upgraded, sporting STI-tuned front and rear SACHS dampers and coil springs, engine compartment equipped with flexible V-braces, and low centre-of-gravity Boxer engine at the core—not to mention the STI’s adjustable rear wing.

Even the chassis and subframe come reinforced with Draw stiffeners to improve steering response, ensuring you are always in control.

Adding intrigue to inquiry, intuitive driving and entertainment technology takes some of the guesswork out of this experience. All models of the Subaru BRZ come with the technology you’d expect, including a seven-inch infotainment touch-screen system complete with sat nav and smartphone mirroring applications such as Apple CarPlay and Android Auto. Subaru has also made safety a priority, equipping every 2018 model with its proprietary EyeSight Driver Assist Technology, which literally provides an extra set of eyes on the road.

The system relies on two cameras to navigate the surrounding environment in 3D, recognizing other cars, pedestrians and cyclists to maximize safety and prevent collisions. Subaru calls it “the culmination of everything Subaru engineers know about safety”. But it’s yet to be seen if EyeSight will make it to the next rendition of the BRZ, as it was the only 2018 model that didn’t come with the new technology. But considering the fact that Subaru is taking its time with the next BRZ (the company hasn’t confirmed a 2019 version, but ensures they’re working on something special), it makes sense that EyeSight will make its way to the BRZ as we expect the newest model won’t come out until at least 2021.

With EyeSight, the Pre-Collision Braking system can detect potential collisions and apply the brakes to reduce speed or stop the car entirely, while its Reverse Automatic Braking system can detect people or objects when reversing, alerting the driver in emergency situations. Other features include adaptive cruise control, sensors that can detect if the car wavers due to driver fatigue, High Beam Assist, Rear Vehicle Detection, as well as its Automated Highway Driving System, which includes lane changing and Traffic Jam Assist for driving on congested roadways.  Even the design of Subaru’s Boxer engine is partly inspired by safety – because the engine sits lower and flatter in the engine bay than traditional engines, it is designed to slide below the cabin rather than through it in the case of a heavy front-end accident.

The matchless grip boosted by Subaru’s award-winning All-Wheel-Drive system offered light weight, while the 18-inch 215/40 R 18 Michelin Pilot Sport 4 rubber translates to quicker turn-ins for the rear-wheel drive vehcile, while across the board Brembo brake calipers make the BRZ tS more than arresting. It’s a steal at $33,495, and set to hit show floors later this year. According to the automaker, colour options for this sleek sportscar come in Crystal White Pearl, Ice silver Metallic, Pure Red, Magentite Grey Metallic, and Crystal Black Silica, as well as WR and Lapis Blue Pearl. So ask yourself: what colour is your dream car?

If you’re still reading, wipe that smirk off your face and put your money where your mouth is, so that your foot can hit the pedal to the medal. Give yourself real reason to grin. 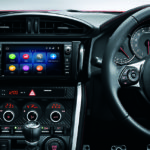 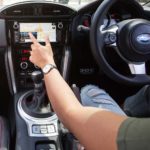 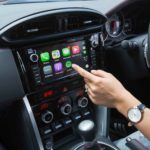 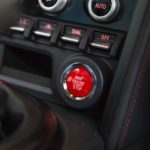